The history of the fire extinguisher

The history of the fire extinguisher

After the tragic fire in London known as the “Great Fire of London”, the journey of coming up with a solution to deal with dangerous fires was birthed. The people affected rebuilt their houses but resolved to ensure that a means of preventing such a disaster from ever happening again was found. So, the insurance companies came up with mobile fire services. The mobile firemen were in need of a way to extinguish the fires. Richard Newsham, in 1721 took out water engine patent. This engine was meant to help the firemen to deal with incidences of fire if there occurred any. The working of the water engine was by producing pressurized water through a jet which could then extinguish fires. This marked the very first time in history where the idea of the fire extinguisher was used. However, at this time, it was better known as a fire engine and not a fire extinguisher.

By 1723 in England, it is recorded that a patent was issued to a renowned chemist called Ambrose Godfrey. This was the first time in history that records the use of the fire extinguisher. It was made of a cask of a liquid that could extinguish fires. This liquid contained gunpowder in a pewter chamber. The cask was then connected to a fuse system. When ignited, the fuse system exploded the gunpowder. At the same time, the solution was scattered. Ambrose’s device is likely to have not been used much due to the fact you had to use gunpowder to power the extinguisher which created more dangers. 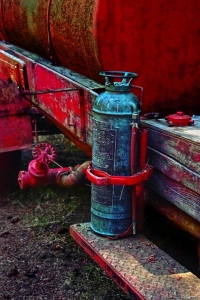 In 1818, the modern day extinguisher was invented by George William Manby, who was a British captain. This device was made of compressed air which was a mixture of potassium carbonate solution, and pearl ash. A French gentleman by the name of Francois Carlier patented the soda-acid extinguisher is the year 1866. Contained in this extinguisher is a mixture of tartaric acid, sodium bicarbonate, and water.

In 1881, Read &Campbell invented an extinguisher that was operated by a cartridge. This version used water solutions and water to put out fires. The same innovators came up with another model which was called Petrolex and was based on carbon tetrachloride. This was followed by the invention of a chemical form fire extinguisher by Aleksandr Loran of Russia. In 1910, a patent was filled by the Pyrene Manufacturing Company for the use of carbon tetrachloride extinguishers for putting out fires. The same company then patented another extinguisher which was smaller, portable and used the same chemical in 1911.

Because carbon tetrachloride was found to be toxic, the extinguishers that operated on it were withdrawn. In 1949, a fire extinguisher that used an external cartridge of CO2 was introduced by Ansul. From Europe, Halon 1211 was introduced in the US in the 1970s. However, it had been used in Europe for a while. The US army and DuPont developed the Halon 1301 version in 1954. The working of both was based on the fire’s chain reaction with fuels contained in the extinguishers. Today, the Halon series is still being used though it’s continuously being restricted as it has a number of negative effects on the environment.

Since the mid-20th century, the modern version of fire extinguisher has been in use. But with the introduction of more varied ingredients, there are slight differences but the technology remains conventional.

So now you know the history of the fire extinguisher give us a call if you need some training on how to use them, we also provide training for so many more services, just speak to one of our highly trained staff today.